Bowsland Green is a primary school located on the edge of Bradley Stoke, along Bowsland Way. Our membership is diverse, as we serve a community made up of many different cultures, faiths, families and needs, so it is important to us that we celebrate this uniqueness and embrace the different groups that make up Team Bowsland. There is a lot we can learn from each other. Pupils can come and go as families move to the country or back to home countries, but it is important to us that everyone feels part of our team and that they belong. Our Friends of Bowsland Green parent committee and our school governors work hard to support the school and its community.

Bradley Stoke is a town in South Gloucestershire, England, situated on the north side of the city of Bristol 6 miles (9.7 km) northeast of Bristol city centre and 103 miles (166 km) due west of London. Not far from the Severn Estuary of the Bristol Channel, Bradley Stoke is bordered by three motorways; the M5 to the north, the M4 to the east and the M32 to the south. Our school is on Bowsland Way, which measures approximately 800 metres long. There is only one street named Bowsland Way making it unique in Great Britain.

The area that is now Bradley Stoke was once a farmland north of the village of Stoke Gifford near Bristol city. The area consisted of a number of farms, Bailey’s Court and Watch Elm Farm in the south, Bowsland Farm and Manor Farm in the north and Webb’s Farm in the middle. Some of the lands were used as pasture. A number of woods also existed, Sherbourne’s Brake, Webb’s Wood and the large Savage’s Wood have all been preserved. 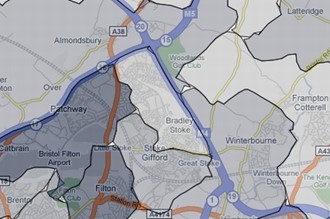 Planned in the 1970s, building of the estate began in 1987. Bradley Stoke was Europe’s largest new town built with private investment and was named after the local Bradley Brook and Stoke Brook streams, which flow through the area. The Woodland area of Bradley Stoke is named Three Brooks Local Nature Reserve, an area of that includes bluebell woods, rough grassland, brooks, ponds, and the man-made Three Brooks Lake. The lake, part of the Frome Valley Relief Sewer, is home to many common species of waterfowl including nesting swans. There are also a number of other walks and paths surrounded by small wooded areas connecting various parts of Bradley Stoke. Wild fruit can be found throughout the woodland, namely blackberries, apples, plums and cherries. A community orchard grows in the heart of the woodland.

The Willow Brook Centre, Bradley Stoke’s town centre and shopping hub, attracts more than six million visitors every year. The town is predominantly residential but was planned on a self-standing basis with retail, leisure and commercial areas in the North, South and Central areas, and various business parks on the outskirts of the town. 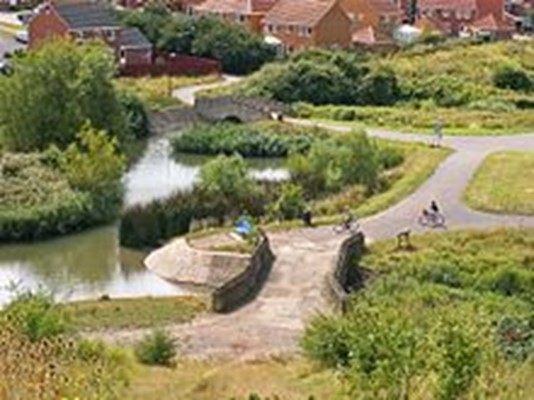 Bristol is a city and county in South West England with a population of 463,400. The city borders North Somerset and South Gloucestershire, with the cities of Bath and Gloucester to the south-east and north-east, respectively. South Wales lies across the Severn estuary. 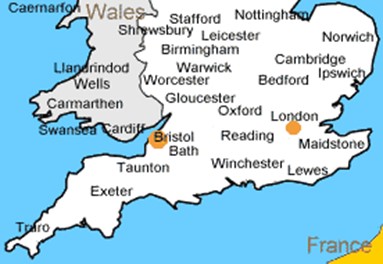 Iron Age hill forts and Roman villas were built near the confluence of the rivers Frome and Avon, and around the beginning of the 11th century, the settlement was known as Brycgstow (Old English “the place at the bridge”). Bristol received a royal charter in 1155 and was historically divided between Gloucestershire and Somerset until 1373 when it became a county of itself. From the 13th to the 18th century, Bristol was among the top three English cities, after London, in tax receipts. Bristol was surpassed by the rapid rise of Birmingham, Manchester and Liverpool in the Industrial Revolution. 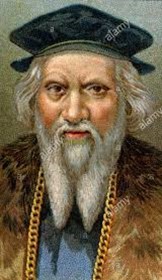 ristol was a starting place for early voyages of exploration to the New World. On a ship out of Bristol in 1497 John Cabot, a Venetian, became the first European since the Vikings to land on mainland North America. In 1499 William Weston, a Bristol merchant, was the first Englishman to lead an exploration to North America. At the height of the Bristol slave trade, from 1700 to 1807, more than 2,000 slave ships carried an estimated 500,000 people from Africa to slavery in the Americas. In the 19th Century, Brunel had significant impact on Bristol through the construction of The Clifton Suspension Bridge, The Great Western Railway and the SS Great Britain. Though Brunel’s projects were not always successful, they often contained innovative solutions to long-standing engineering problems and he achieved many engineering firsts. The Port of Bristol has since moved from Bristol Harbour in the city centre to the Severn Estuary at Avonmouth and Royal Portbury Dock. 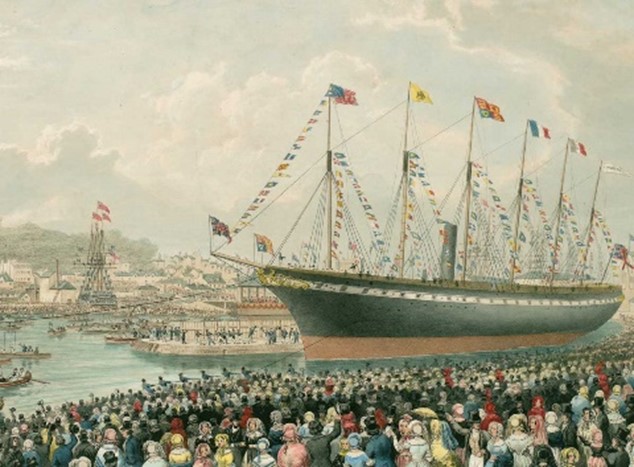 Bristol’s modern economy is built on the creative media, electronics and aerospace industries, and the city-centre docks have been redeveloped as centres of heritage and culture. The city has the largest circulating community currency in the UK; the Bristol pound, which is pegged to the Pound sterling. The city has two universities, the University of Bristol and the University of the West of England, and a variety of artistic and sporting organisations and venues including the Royal West of England Academy, the Arnolfini, Spike Island, Ashton Gate and the Memorial Stadium. It is connected to London and other major UK cities by road and rail, and to the world by sea and air: road, by the M5 and M4 (which connect to the city centre by the Portway and M32); rail, via Bristol Temple Meads and Bristol Parkway mainline rail stations; and Bristol Airport.

One of the UK’s most popular tourist destinations, Bristol was selected in 2009 as one of the world’s top ten cities by international travel publishers Dorling Kindersley in their Eyewitness series of travel guides. The Sunday Times named it as the best city in Britain in which to live in 2014 and 2017, and Bristol also won the EU’s European Green Capital Award in 2015.

South Gloucestershire is a unitary authority area in South West England. It comprises multiple suburban areas to the north and east of Bristol as well as a large rural hinterland. South Gloucestershire was created in 1996 from the northern section of the county of Avon, which was abolished at that time. The area includes multiple towns and population centres, with many of these areas continuing to expand in both population and industry. South of the motorways are suburbs of Bristol while areas north are rural. Some of the inner green belts have been taken away by developments like the new town of Bradley Stoke. The River Severn forms the north-western edge of the area, with a wide coastal plain terminated by an escarpment. East of this is the wide River Frome Valley drainage area. 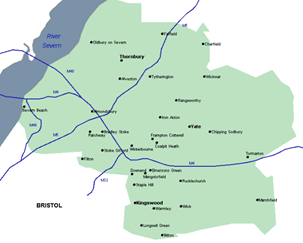 The United Kingdom is an island country located off the north-western coast of mainland Europe. The United Kingdom comprises the whole of the island of Great Britain—which contains England, Wales, and Scotland—as well as the northern portion of the island of Ireland. The name Britain is sometimes used to refer to the United Kingdom as a whole. The capital is London, which is among the world’s leading commercial, financial, and cultural centres. Other major cities include Birmingham, Liverpool, and Manchester in England, Belfast and Londonderry in Northern Ireland, Edinburgh and Glasgow in Scotland, and Swansea and Cardiff in Wales. Our Queen is Queen Elizabeth the Second and our current prime minister is Boris Johnson, representing the conservative party. 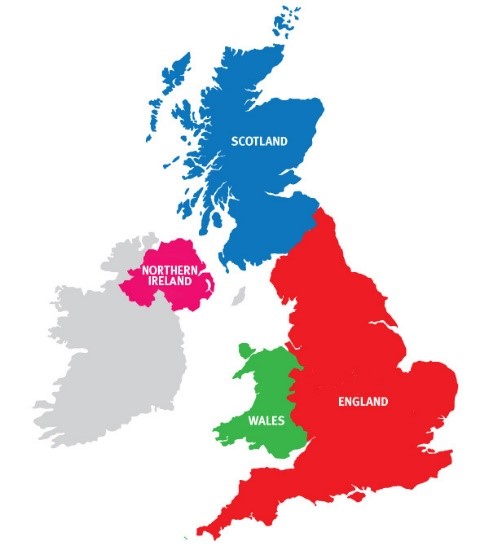 The islands that are today the United Kingdom were invaded by the Romans in 55 BC. This brought the local islanders into contact with the rest of Europe. After the Roman Empire weakened, the islands were invaded by the Saxons, the Vikings, and finally the Normans. The English conquered Wales in 1282 under Edward I and the king’s son was made the Prince of Wales. The two countries became unified in 1536. Scotland became part of the British crown in 1602 when the king of Scotland became the King James I of England. The union became official in 1707. Ireland became a part of the union in 1801. However, many of the Irish rebelled and, in 1921, the southern part of Ireland was made a separate country and an Irish free state.

In the 1500s Britain began to expand its empire into much of the world. After defeating the Spanish Armada in 1588, England became the world’s dominant sea power. Britain first grew into the Far East and India and then to the Americas. In the early 1800s the UK defeated France in the Napoleonic Wars and became the supreme European power. In the 1900s, the United Kingdom became less of a dominant world power. It continued to lose control over colonies and was weakened by World War I. However, under the leadership of Winston Churchill, the United Kingdom was the last western European nation to oppose Germany in World War II and played a major role in defeating Hitler.

The United Kingdom played a major role in the history of the world, taking a leading role in developing democracy and in advancing literature and science. At its peak in the 19th century, the British Empire covered over one-fourth of the surface of the earth; however, the events of this time must be questioned and lessons learnt about both the positive and negative impacts of this power.

Our world, is on planet Earth, is the third planet from the Sun and the only astronomical object known to harbour life. According to evidence, Earth formed over 4.5 billion years ago. Earth’s gravity interacts with other objects in space, especially the Sun and the Moon, which is Earth’s only natural satellite. Earth orbits around the Sun in 365.256 days, a period known as an Earth sidereal year. During this time, Earth rotates about its axis about 365.256 times. Earth’s axis of rotation is tilted with respect to its orbital plane, producing seasons on Earth. The gravitational interaction between Earth and the Moon causes tides, stabilizes Earth’s orientation on its axis, and gradually slows its rotation. Earth is the densest planet in the Solar System and the largest and most massive of the four rocky planets. 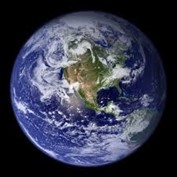 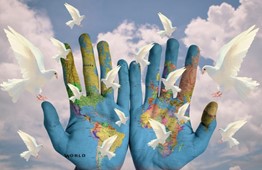 Earth’s outer layer is divided into several rigid tectonic plates that migrate across the surface over many millions of years. About 29% of Earth’s surface is land consisting of continents and islands. The remaining 71% is covered with water, mostly by oceans but also lakes, rivers and other fresh water, which all together constitute the hydrosphere.

In the history of life on Earth, biodiversity has gone through long periods of expansion, occasionally punctuated by mass extinctions. Over 99% of all species that ever lived on Earth are extinct. Estimates of the number of species on Earth today vary widely; most species have not been described. Over 7.7 billion humans live on Earth and depend on its biosphere and natural resources for their survival. Politically, the world has around 200 sovereign states, each with their own diverse history and culture, which have shaped our world.